Ammeters
Fig. 1(a) shows that fixed coils and moving coil of a dynamometer instrument connected in series and assumed the current through moving coil does not exceed a certain the upper limit depending on its construction. 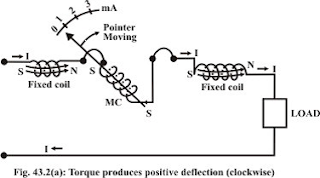 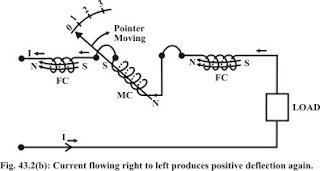 The flux direction through the fixed and movable coils due to current is shown in Fig. 1 (a). it can be noted that the N–pole of the moving coil flux is reflected from the adjacent N–pole of the fixed coil and on the other side adjacent S–poles are also repelled each other. This results the pointer to move clockwise direction from ‘zero position’ to a steady position depending upon the magnitude of current flowing through the coils. Fig.1(b) illustrate the effect of reversing the direction of the current through the coils and shows that the deflecting torque produces movement of the pointer in the same direction. This means that the dynamometer instrument suitable for both dc and ac measurements of current and voltage. The dynamic instrument when uses as a voltmeter, the fixed coils wounded with thin wire are connected in series with the moving coil and a non-inductive resistance (see Fig.4). For ammeter application the fixed coils are connected in parallel with the moving coil, and in parallel with a shunt, as required (see Fig. 3).

Ranges of Ammeters and Voltmeters
Ammeters

A given size of instruments requires a definite number of ampere-turns to be supplied by the fixed and moving coils to obtain a full–scale deflection. Ammeter ranges are altered by changing the number of turns and size of conductor in the fixed and moving coils. A double range instrument may easily be obtained by connecting different coil sections either in series or in parallel. The internal connections are shown in Fig.43.3. The maximum range for which ammeters are usually constructed is dependent on its application. For ammeter use in which only fraction of rated current (say 200 ma) is carried by the moving coil to alter its range by changing the mode of connection of the fixed coils. 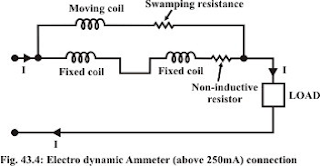 • The percentage change of resistance with temperature must be the same for the two branches.

Voltmeters:
The connection for use as a voltmeter is shown in Fig. 43.5, in which fixed and oving coils are connected in series with a high series resistance having “zero resistivity co-efficients”. The combination is connected across the voltage source or across the load terminals whose voltage to be measured. At steady state condition of deflection Td -= Tc
This implies that deflecting torque is directly proportional to V2  This is possible if θ varies from 45º to 135º over the range of instrument scale.
Electro-dynamic meter’s use is much more common for ac voltmeters than for ac ammeters because of practical limitation on the current through the moving coil. Electrodynamic ammeter needs to read rms values of AC accurately irrespective of signal waveform or distortion of signal waveform.

Wattmeter: Perhaps the most important use of the electrodynamometer is for the wattmeter. The mechanism of electro dynamic wattmeter closely resembles that of an electro-dynamic ammeter, but the moving coil of wattmeter is connected in series with a high non–inductive resistance. It provides with separate terminals to connect across the load terminals. The fixed coil is connected in series with the load to have the same load current. A typical connection of an electrodynamometer for use as a wattmeter is shown in figure 6.

For a.c circuit: Let the applied voltage v(t) =Vmsinωt; and the currents through the moving and fixed coils are given by
im(t) =Vm/R  sin ωt (assuming inductance of moving coil is negligible)
if (t) = iL (t) = Im sin (ωt±φ)
where φ is the power factor angle of the load (+φ leading p.f of the load and −φ for lagging p.f of the load).

where V and Iare the r.m.s values of load voltage and current respectively. It may be noted that the developed torque must be equal to the controlling torque at steady state. In other words, the controlling torque Tc∝ θ and this implies that θ ∝ power (average). Thus an electro-dynamic instrument, connected as shown in Fig. 6, becomes a wattmeter which will give a direct deflection of the power in either dc or ac circuit.
The wattmeter use an electrodynamometer movement because the meter reads true power
regardless of the value of angle θ.. Figure 7 shows the circuit diagram of the single phase electrodynamometer wattmeter 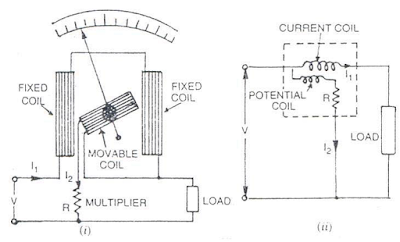 A dynamometer type three-phase wattmeter consists of two separate wattmeter movements mounted together in one case with the two moving coils mounted on the same spindle.

The Radio Society of Sri Lanka